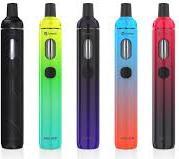 There’s really no doubt that Aspire is a hardware brand that vapers trust, and for good reason. From their minimalistic pod mods to their highly advanced sub-ohm systems, they never let users down. Their technology is always highly advanced, and their constructions are always as reliable as they come.Now, Aspire has presented us with the Feedlink Revvo Squonk Kit, [...]

The eLeaf iKuu 180 w/ Melo 4 3000mAh Kit is perhaps the most advanced system from the brand to date. Equipped with a monstrous internal battery, generous temperature control options and amazing power, this kit is a great choice for any sub-ohm vaper who craves a highly dynamic, stunningly durable and exceptionally sophisticated setup.If you’re tempted by this amazing [...]

For ten years, Joyetech has been ahead of the vaping hardware game. The brand never fails to dream up new ways to combine the most advanced vaping technology with the most stunning visual designs. The Joyetech ESPION Solo 21700 80W with ProCore Air TC Kit is perhaps their most exceptional starter kit to date. This powerful device blends portability with [...]

Any experienced vape enthusiast knows that Joyetech is a trusted brand that delivers consistently reliable and high-quality products. The Joyetech Cuboid Mini Kit is a small, portable device that utilizes the very latest in vaping technology. With a unique coil design and a high-quality, durable atomizer, this product won't disappoint. Plus, it requires minimal maintenance and delivers consistent hits all [...]

Clouds are undeniably part of the mass appeal of vape mania. Taking a long drag from your MOD and exhaling a huge, perfectly puffy cloud is certainly one of the most satisfying aspects of vaping. Despite this, it is also one of the most wasteful – consistently taking huge hits from your device can result in a diminished user experience [...]

Steady as You Fill

It would be easy to assume that vaping ratios don’t matter. Of course, this would be a false assumption, because the proper vape juice ratio is the key to a premium throat hit. By “premium”, this refers to taste, flavor, and the thickness of the clouds produced. Regardless of your experience level, it is important to understand PG (Propylene glycol) [...]

The Damage of Burnt Coils and How to Avoid Them

The wick and coil in your electronic cigarette or MOD should not be used if they are giving you a burnt taste. There are many ways to avoid burning out your coil and they should be replaced correctly. Here are a few reasons why you should avoid using your device when your coil is burnt out and how to [...]