The Hot Topic: Allowing Employees to Vape at Work 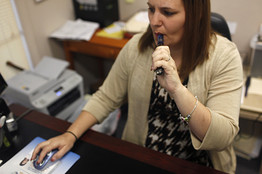 If you’re a vaper with a regular job, you’ll either be in one of two camps. Either your boss allows you to take vaping breaks alongside the cigarette smokers, or you aren’t allowed to at all. Regardless of which camp you fall into, this is a hotly debated topic among higher-ups at many companies.

In fact, letting vapers participate in their hobby at work would increase productivity quite a bit. Taking frequent breaks at an office job actually increases productivity by a huge amount. Recent studies have consistently shown that taking a break once an hour helps workers come back to the job with more energy and more creative fuel. Even more so, taking that vaping break can get you through that afternoon slump without the downsides of a later crash like caffeine would give. It also forces you to get up and be active, by walking around and getting out into the sunlight for a period of time. By disallowing regular workers breaks other than lunch, bosses are actually decreasing how much you can get done and decreasing your long-term health slightly.

It seems as if many of these bosses forget that vapor is completely harmless. Not even close to cigarette smoke, vapor is water vapor that simply dissipates fairly quickly. This would let vapers not fall into the categories of smoke breaks or no breaks at all, but would let them into a third, unique camp: vaping at their desk. Since vapor is completely harmless, disappears fairly quickly, and has little to no smell, there’s no reason not to let vapers vape while working. Some studies have shown that fidgeting or chewing on something while working allows for greater focus on the main task at hand. Vaping can count as one of these task focus enhancing habits. Since it’s a repeatable task with a rewarding outcome, your brain and body want to keep doing it. There are no downsides other than taking your hands off of the keyboard or whatever you’re using to do work with, but that’s only momentary.

Of course, vaping at your desks isn’t just an issue of productivity. It’s also an issue of desk etiquette. If you think about it, you probably wouldn’t want someone at the desk next to you blowing huge clouds in your face when you’re trying to work on something important. Therefore, it’s critical to be mindful if you do vape at your desk. Never blow your clouds in the direction of a coworker, and never blow excessive amounts of vapor into the room without letting it clear first. You never want to create a haze at work, no matter how tempting it is. Also, make sure you don’t start cluttering up your desk with spare  e-liquids bottles or accidentally taking up someone else’s desk space while you’re at it. Especially if you bring spare parts and backups, the area taken up by your vaping can add up pretty quickly.

As long as vaping at work is done in a respectable manner, it’s definitely a feasible option. Vaping and working can make work so much more productive. Time to win over your bosses with your new found knowledge, and help your fellow vaping employees out while you’re at it.