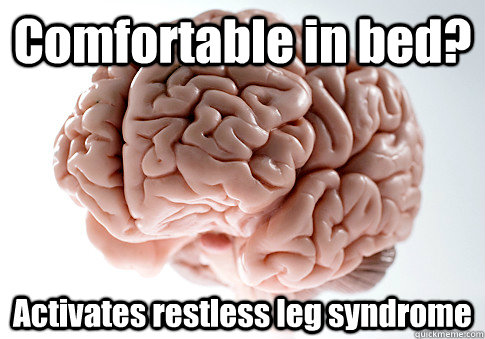 Restless leg syndrome (RLS), also known as Willis-Ekbom Disease, affects 10% of the population, yet it remains largely misunderstood, both by the general public and the medical community. This condition can vary in severity, but in most cases, it can cause, at the very least, incredible inconvenience due to its discomfort and the way in which it can interfere with important daily tasks.

If you have restless leg syndrome, we understand that you are probably desperate for relief. This condition is very difficult to treat, and so many patients feel hopeless that hey will ever experience the relief that they deserve. However, new evidence indicates that there may be hope for patients after all, and it’s completely natural and holistic. CBD, as it turns out, may hold the key to treating the symptoms associated with restless leg syndrome.

CBD is a cannabinoid that’s abundant in the hemp plant. It’s extracted and combined with other ingredients so that it may be used for wellness purposes. CBD is widely considered safe, even in large doses and over extended periods of time. And, it’s completely legal, and does not require a prescription.

What Exactly is Restless Leg Syndrome?

RLS is a condition which affects a person’s legs. The condition involves uncomfortable, restless sensations in the legs, and these sensations result in an involuntary urge to jerk them or shake them. The legs can twitch sporadically or may feel as though they have fallen asleep.

Restless leg syndrome seems to be intermittent for many people, with most experiencing these sensations more frequently during the evening hours compared to the daytime. Also, it’s believed that people with the condition are more likely to experience these symptoms when they have been sitting still for a long period of time. Therefore, it’s safe to assume that inactivity seems to make the symptoms worse.

One of the main problems with restless leg syndrome is that it can dramatically interfere with a person’s ability to sleep. Due to the fact that these symptoms seem to worsen during periods of inactivity, many sufferers find that when they are lying down to go to bed, their legs twitch uncontrollably every minute, which makes it nearly impossible to doze off. This, of course, can lead to additional problems, as sleep deprivation can interfere with day-to-day function.

One of the problems with restless leg syndrome is that there is no known cause. However, medical researchers believe that genetic factors may come into play. It’s possible that certain genetic variations can increase the likelihood of developing the condition, and it seems that it is passed down from generation to generation.

It is believed that dopamine production comes into play as well. It seems that restless leg syndrome may stem from an interrupted dopamine pathway that leads to involuntary jerking of parts of the body. This is why those who suffer from Parkinson’s Disease seem to be more likely to develop restless leg syndrome as the disease progresses.

Also, there are other factors that may contribute to the development of restless leg syndrome. These include alcohol abuse, nicotine use, certain types of anemia, neuropathy and the use of certain medications used to treat other ailments.

The only real symptoms associated with restless leg syndrome are an uncomfortable feeling of restlessness in the legs, and the feeling of relief upon moving the legs. Also, some may experience twitching and jerking of the legs that seems to be involuntary.

Restless leg syndrome cannot be diagnosed using concrete diagnostic methods such as blood tests. A doctor will determine whether or not a patient has restless leg syndrome based on the patient’s testimony of their symptoms. The doctor will ask a series of questions, and possibly use certain tests to rule out nerve damage and other neurological conditions.

Are There Any Current Treatments?

However, there are no known medications specifically for this condition. Instead, doctors aim to treat side effects of the condition such as insomnia and any pain that can result from twitching and jerking the legs.

Could CBD Help with RLS?

While there have been no specific clinical studies in order to observe the effects of CBD specifically on restless leg syndrome sufferers, many members of the medical community believe that this cannabinoid can actually help treat this condition. Various clinical researchers have observed that CBD can help alleviate the symptoms of this condition due to the fact that there are cannabinoid receptors found along the nerves of the legs, and that these cannabinoid receptors respond to CBD intake by regulating nerve function. In fact, you can easily find lots of anecdotal evidence of doctors using CBD to treat restless leg syndrome with much success, whereas before, they were unable to treat it at all with other methods.

Additionally, CBD can absolutely help with side effects caused by the condition, such as sleeplessness and irritability due to the discomfort that is caused by these sensations.

Also, CBD seems to help regulate the brain’s dopamine production while improving the dopamine pathways, and, as we said earlier, medical experts have found a link between dopamine pathway interference and restless leg syndrome.

How to Take CBD for Restless Leg Syndrome

If you want to try to take CBD in order to potentially treat restless leg syndrome, first we must urge you to seek out a full spectrum CBD product. Full spectrum CBD contains all of the potentially beneficial compounds found in the hemp plant, including CBD, other cannabinoids and terpenes. When all of these compounds are taken together, the likelihood of finding relief increases dramatically.

You also want to strive to find the highest-quality CBD that you can find. Look for a company that displays third-party lab results on their website. These results indicate the quality, potency and purity of the CBD that they put into their formulas.

We suggest that you take CBD orally in addition to topically. Topically, CBD can be massaged into the leg, and once it absorbs into the skin, it has the potential to benefit nerve function. When taken orally, it can provide more widespread effects, can aid in sleep and can potentially provide more potent relief.

Take CBD daily for the best results. The endocannabinoid system seems to use CBD most efficiently when a person takes it daily, allowing it to accumulate. And, you can always increase your dose incrementally after a few weeks of taking the suggested amount.

If you are on other medications, we suggest that you speak to your doctor before taking CBD. Because your doctor knows your medical history, they will want to be aware of anything that you are using to treat the condition.

The Potential RLS Relief is There

This unpleasant condition may be misunderstood, but what we do know is that CBD seems to have the unique ability to make many of the symptoms more manageable. If you or someone you know is dealing with this condition, we recommend speaking with your doctor and starting a CBD regimen. Use the guide above to get started.